Gemini in the Druidcraft court cards


Today let’s have a look at Gemini in the Druidcraft court cards.

If you work with a system that assigns the mutable mode to the Knights, as I do, you’re looking at the Knight of Swords.  Mutable Knight in a mutable sign – is it any wonder that this Knight always looks as though he’s moving so quickly?!  The Knight and his horse appear to be almost flying, in some depictions.  We’d expect this card to be about change and transformation, then, in the realm of thoughts, ideas, and beliefs. 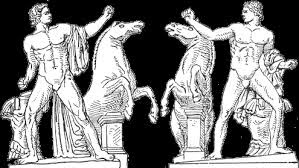 I like this image of Castor and Pollux, the twins in the Gemini constellation, with the Knight chess pieces in the background!

Knights are associated with quests, too, so this Gemini Knight is probably searching for knowledge and information, not necessarily deep wisdom but knowledge for its own sake.  As we can see, this team want to find this information quickly before dashing off again.  No wonder this Knight has the reputation for rushing into things, turning them on their heads, and then leaving in a rush – he’s impetuous!  I’m reminded of the butterfly, another symbol for airy Gemini – stopping briefly to gather nectar before moving onto the next flower.


Easily bored? Another trait that’s sometimes (unfairly) associated with this Gemini Knight – but remember that Gemini is not about the shallow, the superficial; there’s real strength in its intellectualism.  He’s likely to say what he thinks, and won’t have any problem in articulating his thoughts in a direct way.

The Druidcraft has Princes, not Knights, but they express similar qualities. The Prince of Swords here looks as though he’s moving swiftly – the background’s all blurry!  He’s a seeker – of knowledge.  It’s about ‘goal-oriented mental activity’, to quote Gerd Ziegler (‘Tarot: Mirror of the Soul’ (published by Weiser Books).  He’s quick-thinking (Mercury, ‘quicksilver’, rules Gemini) and imaginative.

This can also indicate a radical change, a shaking-up of routines that have perhaps become too fixed, a change in studies or career – especially if it involves the collecting and absorbing of facts and ideas - or a change in the social network.  It doesn’t have to be bad - sometimes a good shake-up is needed! It’s all about stimulating and developing the mind.

I’m intrigued by the fact that this is the only one of the Druidcraft’s Princes whose horse wears a protective mask. The Prince carries a shield, although the Prince of Pentacles does too, so he’s not alone there.  I wonder if the spikes on the horse’s headgear and the sword and shield the Prince wields are for pushing the boundaries of his intellect (hence HEAD-gear) – a Gemini concept if ever there was! Or perhaps sword and shield represent the yang and yin and the marrying of opposites we saw in the Lovers.  This ‘union’ is also represented by the horse and rider appearing to be a single entity.  We need this balance, this union, in order to forge ahead and find what we seek on our quest.