Virgo in the Druidcraft Minor Arcana: The Nine of Pentacles


Following on from the Eight of Pentacles, we have the Nine, linked to Venus in Virgo, and to the middle ten days of the sun’s journey through this sign (3rd-13th September).  We’re still looking at Virgoan qualities here, so it’s Venus that gives the Nine a different ‘flavour’ from the Eight. 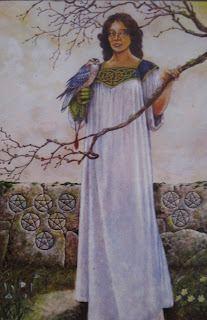 Virgo is the sign associated with the harvest, while Venus symbolizes harmony – a sense of well-being. However, Venus is not really that comfortable in Virgo, though – in astrological terms she’s ‘in fall’ in this sign.  This can come out in the Virgoan critical faculties, when Virgo’s ideals and standards aren’t met – when the ‘perfectionist’ goes overboard.  But I can also see this ‘Venus in Virgo’ in the calm, practical pleasure that the woman in the image is taking in what she’s produced.  The tree is bare, suggesting that she’s already reaped its fruit and is now able to use that to sustain  her through the coming autumn and winter months, a practical,mutable, down-to-earthy Pentacles approach to life!

Venus in Virgo can also be cautious, or conventional.  The fruits of her labours may have been a result of ‘tried and tested’ methods, not something new or revolutionary.

As I mentioned in earlier posts about Virgo, this sign is the sixth one encountered in the journey around the zodiac, and as such, represents the closing of the first half of that journey, that of the individual.  From here on, the focus shifts to the wider, outer world.  I think this comes across clearly in the Nine of Pentacles (as well as in the Hermit, see earlier post) – there’s a sense of self-sufficiency in this card. There’s no one else in sight.  She’s alone - but not lonely, and is happy enough in that state.  She doesn’t need more, but she’s content with what she’s achieved, and with the promise of what’s ahead - the culmination, the Ten, is still to come.  The expression on her face in the Druidcraft’s image reflects that, I think – she’s serene, prepared for the winter months.

The bird of prey on her hand represents a very Virgoan quality: discipline – the ability to give attention to the job at hand.  The discipline here is not imposed from an outward source; it’s about having the self-discipline required to devote time and energy to something that you really want to achieve. And when you do achieve it, you – like this woman - can enjoy the fruits of your labour!

Druidcraft Tarot created by Philip Carr-Gomm and Stephanie Carr-Gomm, illustrated by Will Worthington, published by Connections,2004