Going with the Pisces flow 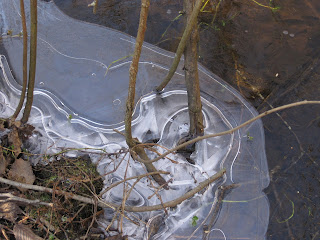 In the northern hemisphere, at mid-latitudes, it’s the time of year when the ice and snow starts to melt.  Water begins to flow as it’s released from its frozen, crystalline (Aquarian!) state. Boundaries melt. It’s a time of release, of letting go, of merging. A time to learn to accept what can’t be changed or controlled, as well as a time to surrender to change that is beyond our control.
Unsurprisingly, then, we find that the sign of Pisces is one of the three Water signs. We’ve already met Cancer, the cardinal Water sign, and Scorpio, the fixed Water sign. Pisces – the mutable Water sign - completes the triplicity. In many ways, I think this is the easiest of the three triplicities to understand – after all, water in its natural state is free-flowing, and can be found in many forms (mutable meaning the ability to transform).


The astrological glyph for Pisces is said to symbolize two fish held together by a string. In the constellation, the fish are usually ‘seen’ as swimming away from each other.  Alpha Piscium, the star at the point corresponding to the knot in the cord joining the two fish, is also known as Alrescha, from the Arabic al-Risa – the “well-rope” or “the cord”. The glyph’s symbolism can be extended to represent our dual nature - one fish could be seen as swimming upwards towards the heavens as if looking for spiritual guidance, while the other continues along the path of the Sun (the elliptic), concentrating on more earthly or material pursuits.

In Greek mythology, Pisces has many associations with Aphrodite (Venus in the Roman pantheon), who - as a reward to the fish who rescued her - placed the fish into the night sky. In astrological terms, Venus (the planet) is said to be exalted in Pisces, expressing all-encompassing love and compassion.

The traditional ruler of Pisces is the planet Jupiter.  Jupiter, as you may remember, is a huge planet comprised mainly of hot gas. Known as the ‘Greater Benefic’ (Venus being the ‘Lesser Benefic’), Jupiter is associated with growth, expansiveness, benevolence and laughter (Jove, the Roman version of Jupiter giving rise to the word ‘jovial’).  It’s also linked to higher learning, to philosophy, law, and religion (in the broadest sense of the word) – to expanding our horizons, lifting us to new heights (remember that hot-air balloon?!). With Pisces, it’s expressed by living through our ideals, by being compassionate and sensitive, and by developing faith in the universe as well as the self.  William Blake wrote, in his The Marriage of Heaven and Hell, that “The road of excess leads to the palace of wisdom" – a wonderful description of Jupiter in Pisces!

Pisces also has a modern ruler, Neptune.  This planet was ‘discovered’ (or identified!) in 1846, and was named after the Roman god of the sea.  Neptune is associated astrologically with compassion and empathy, and is said to show us the areas in our lives where we want to merge, rather than stand out. It’s linked to dreams and visions, and our highest ideals. Imaginative, but not a lover of boundaries – it wants to transcend limits.

So, where does Pisces fit into the tarot?  Stay tuned for an exploration of the final zodiac sign in the cards...

*In Sidereal astrology, the sun currently transits Pisces from approximately 15th March to 14th April.
Posted by Alison at 07:30