Scorpio in the Major Arcana: Death

After dipping into the Minor Arcana – and the excitement of the Samhuinn Tarot Blog Hop! - let’s look at Scorpio in the Major Arcana.  Given what we know of Scorpio, it probably comes as no surprise that the card associated with Scorpio (in the system I follow) is ‘Death’.  Death, as in the end of a cycle – something that’s necessary in order to allow something new to grow and develop.  Not physical death, or at least, not necessarily. 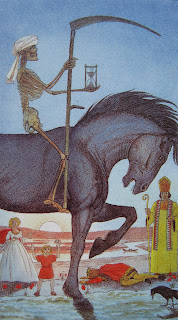 Traditional depictions of ‘Death’, number 13 in the Rider-Waite-Smith tarot, show us a knight in armour on a white horse, a king dead underfoot, a religious figure in its path, sometimes children.  The image in the Sharman-Burke/Caselli tarot (Beginners' Guide to the Tarot) is a variation on that theme; here the horse is black (the colour associated with death in some cultures), its rider a skeleton.  The skeleton’s headdress is a swaddling cloth, used at birth, reflecting the link between birth and death and the unending cycle of life.

The skeleton carries an hourglass, reminding us that everything has its time. In the distance, we see a river – another reminder of the ongoing process of transformation, this time in the form of the hydrological cycle (the river water evaporates and forms clouds, the clouds rain, the water falls back to earth).  The boat is said to symbolize both the cradle and the coffin. In the foreground we see a raven, thought to be a harbinger of death in many traditions.  The theme is Scorpionic – transformation and change; endings linked with beginnings.

The skeleton with his scythe are also seen in the Crowley Thoth tarot’s version of ‘Death’.  He wears two faces here – one is that of the destroyer, the other that of the liberator – reminding us that in order to change, we may have to let go of things that hold us back, that no longer serve us.  The headdress of this skeleton is a funereal head-covering, used in ancient Egypt – a reminder of the need to bury old, out-dated, invalid ideas and beliefs so that new life can begin.  We see the scorpion at the bottom of the image, ready to sting, and the snake – perhaps THE symbol of transformation – ready to bite.  A fish, representing the past, swims through the serpent’s coils: is it the next victim?  Above it all, the phoenix, which can only rise from the ashes once the fire has consumed everything in its way. Intense? Oh yes!

The Shadowscapes Tarot also draws on the promise of renewal with its phoenix rising from the ashes of the devastation, the tearing down of what has been, ready for what’s to come.  It's one of the more 'optimistic' versions of the Death card, I think - the fiery-red phoenix, symbol of death and rebirth and life all in one, looks upwards and outwards towards what appears to be a sunny future... What do you think?

The creator of the Shadowscapes deck, Stepanie Pui-Mun Law, incorporates a lot of botanical symbolism in her images. Here we see irises, my favourite flower. These are also associated with death, through Greek mythology: Iris, goddess of the rainbow, would not only travel down to earth with messages from the gods, but also transported souls to the underworld.

Deadly nightshade can also been seen here - an extremely poisonous plant, so associated with deception, danger, and death - as well as sumac, which (according to the Victorian language of flowers) says "I will survive the change".

The Wildwood draws on different images of death, representing transformation.  In ‘The Journey’, Will Worthington has given us an image of the raven (considered to be a guardian of the dead, or guide to the otherworld) tearing flesh from a skull of a reindeer - a symbol of the stripping of life, and of the (re)cycling of life through death and birth; all 8th house/Scorpio issues.

Both the Druid Craft’s creators and Margarete Petersen have made reference to the Crone in their depictions of Death. There’s an element of looking backwards and forwards with the Crone-Hermit, and that ‘crone knowledge’ or wisdom associated with the Hermit is necessary in order to make the changes that Death demands. The serpent, representing transformation, is present in both images – in fact, in Margarete Petersen’s version, we see two serpents, one white, one black. There are links back to her High Priestess, Chariot, and even the Lovers in the way she’s used duality and opposites in her work. Her Death image is almost a mirror image: white serpent meets black serpent; Death, in the form of a cloaked skeleton, stands behind the white, earth-bound figure. Out of the dark comes light. A bit like the phoenix, then?