Yes, the Sun has moved into Libra, in astrological terms at least. It often feels, to me, like the start of a new year - perhaps reflecting many years spent in the world of education in the northern hemisphere: the start of a new school yar, new term, new friends, new connection.  A turning point in our lives - and in the astronomical world too.

The Libra ingress marks the turning point where, depending on which hemisphere you’re in, the days either become shorter (north) or longer (south), due to the tilt of the Earth and its position relative to the Sun.  This point, where the length of day apparently is equal to the length of night, is marked by the ingress of the Sun into the astrological sign of Libra (in the tropical zodiac) – the scales.


The constellation of Libra (Latin for “weighing scales”) was known as Zibanu (“balance” or “scales”) in Babylonian times. Scales were sacred to Shamash, the Babylonian sun god, who was also associated with truth and justice, concepts that are still associated with the sign of Libra today.  The Babylonians also called this constellation the Claws of the Scorpion – the constellation sits next to that of Scorpio and may have been considered to be part of the scorpion. The Arabic word for scorpion is “zubana”, not dissimilar to the Babylonians’ “zinbanu”, which might perhaps account for the “claws” becoming the ‘scales”. 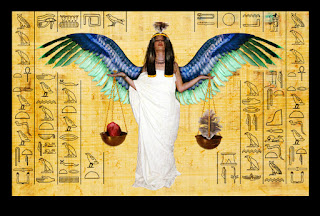 It starts with the wedding of Peleus and Thetis. Eris, the goddess of Discord (a “shadow” side of Libra), hasn’t been invited but decides to gate-crash. She throws a golden apple down in front of all the goddesses who have been invited.  On the apple is inscribed ‘to the fairest’.... and so we have perhaps the first beauty pageant! Hera, Aphrodite and Athena are the front-runners, and ask Zeus (Jupiter, in Roman terms) to choose. Zeus, in his wisdom (or some would argue, cowardice!), elects Paris, a Trojan mortal to be the judge. Atop Mount Ida, the three goddesses attempted to bribe Paris – Hera dangled the prospect of becoming king of Europe and Asia, Athena wisdom and battle skills, and Aphrodite the most beautiful woman in the world.  Paris chose Aphrodite’s gift – Helen, wife of the Greek king Menelaus... and the rest, as they say, is history, at least in mythological terms.  The Trojan horse, the “face that launched a thousand ships” ... even the idea of “who is the fairest” comes up again and again – and not only in fairy tales such as Snow White!

So many Libran qualities are illustrated in this myth –beauty, harmony, attraction, negotiation and adjudication.  And no surprise that Venus (the Roman goddess most similar to Aphrodite) is the ruler of Libra!  But “to the fairest”?  That also taps into Libran ambiguity!  The fairest in terms of the most beautiful, or the most even-tempered? The most well-balanced when it comes to making judgments?

Libra, despite the association with beauty and attraction through Venus, is more a sign of balance. It’s considered and reflective, more concerned with “the other” (7th house) than with the “I” (1st house). Libra is mediator, negotiator, and diplomat.