A dip into the Runes

Now that we’re in Scorpio, the sign of – among other things – secrets, I thought it was time to dip into the runes and see what secrets I could unearth there.  Today, out of the Alembic comes … 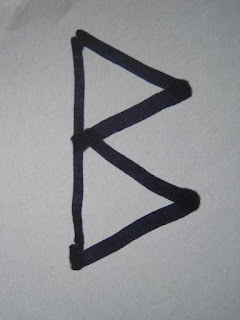 …also referred to as Beorch, and Ba, depending on what source or system you’re using.  According to some, Beorc means ‘birch goddess’, but ‘birch’ seems to be the most common translation.

Birch symbolizes growth, birth, becoming.   The birch was considered as the tree of fertility.  I’ve also heard it used to represent the idea of liberation, although it might be more about increasing vitality, which in turn could lead to shaking off the old and feeling liberated as a result. Being lightly whipped with twigs of birch was meant to increase vitality; this practice still exists in Scandinavia where, after being in a sauna, you’re meant to roll in the snow and then lash yourself with birch twigs!

Beorc is a fertility symbol, the two lobes resembling a woman’s breasts.   The rune suggests the start of something new – the birth of a new idea or new project, perhaps even the birth of a child.  It can also symbolize your home, where you come from, your roots.  You might be being asked to develop greater awareness of ‘hearth and home’.

Ba can also mean ‘boat’ and ‘bier’.  That might not seem to relate to the other meanings associated with this rune, but just think about the Viking funerary traditions:  they set the biers on boats, sending their dead across the sea to a new life.  Death, birth.

Beorc shows up on Hermann Haindl’s eponymous Tarot deck’s Death card.  We see the boatman ferrying his boat across the marshes – Charon, perhaps, or one of the Avalon boatmen waiting for another soul to carry onwards. The cycle of life and death again, appearing in the card of transformation and the ‘great journey’.  Here the presence of Beorc reminds us of (re)birth part of the cycle, and the sense of liberation that comes from letting go of what’s no longer of use.

…and Death is also linked, astrologically, to Scorpio…the sign we entered only a few days ago.  More about this card in the next few days…