Welcome to Alison’s Alembic!   You may have arrived here as a stop on the Tarot Blog Hop from either Louise's Priestess Tarot or Joy Vernon's blog.  Or you may have found this through TABI’s Facebook page, or though one of the many wonderful tarot bloggers in the ether.   However you came to be here, welcome to this installment of the Tarot Blog Hop!

For those of us in the northern hemisphere, it’s the Summer Solstice today (5.04 a.m. UT) - the longest day, the shortest night. It’s the time when the sun appears to have reached a standstill; the word ‘solstice’ means ‘the standing of the sun’.  The sun has reached its zenith in the sky - its furthest boundary of power, if you like – and as such, its greatest potency.  For those of us below, it’s time to stop and look back at what we’ve achieved on our journey, since the Winter Solstice six months ago.  Now we can celebrate what we’ve created, as well as acknowledge what hasn’t worked.  It’s no surprise that this solstice (again, in the northern hemisphere) has been called the ‘Festival of Achievement’.

Various images from the tarot flash through my mind as I think about this. The Sun is an obvious one, as cards often show the sun at either its highest point in the sky, or at full power.

But another card, from the Wildwood Tarot, seems to reflect some of this too: the Six of Bows.  Subtitled 'Abundance', I see the fire in the centre symbolizing the warmth and light of the sun, while the placement of the bows in a circle represents the wheel or cycle of life.  The 'fruits of our labours', the things we've achieved, the abundance, whether that be material or something less tangible, sit at the edges of the wheel - things we've gained along the way.

To celebrate the Summer Solstice, our wrangler for this year’s Litha Tarot Blog Hop, Sharon, has asked us to share our gifts with each other, in creative ways – to allow the Sun to shine on something that we’re good at, within the circle of the Hop.  It’s not always easy to do this – some of us, I suspect, have a tendency to hide our light under the proverbial bushel.  But if this is a once-a-year opportunity, then it’s time to grab it!

I’ve decided to draw (quite literally) on some of the traditions and images associated with the Summer Solstice and create a card which, who knows, may even become ‘The Sun’ card in my long-talked-about (but slow to materialize) tarot deck! 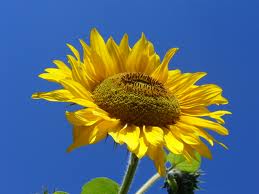 The first image that comes to my mind is the sunflower, its face following the path of the sun across the sky.   I couldn't imagine summer without these, perhaps because I would see fields of them on the prairies where I grew up!

The wheel is another image.  Centuries ago, people would set fire to wooden wheels at the top of hills, representing the zenith of the Sun’s power, and then rolling them down the slope to symbolize the declining power of the Sun as the yearly cycle progresses.  The path of the sun through the sky, the ecliptic, is another sort of wheel, and gives rise to the wheel of the zodiac.  With the Sun at its peak, you might think it would make sense for the Sun to be entering the fiery sign of Leo, rather than the water sign of Cancer!  But apparently, in Denmark, the solstice is celebrated (and has been since the time of the Vikings) by visiting wells, especially those thought to have healing qualities - as well as by bonfires!  The well-visiting seems to have fallen by the wayside nowadays, but I'll re-visit that idea in my next post...


This is also the time when the Oak King reaches his prime, and gives way to the Holly King, who will rule for the next half of the cycle, until we reach the Winter Solstice. From now on, everything will be withdrawing – the crops will be harvested and stored, the earth will prepare to rest, to sleep – and we will begin to think about what it is we want to nurture during the time of the Holly King. But today, it’s time to celebrate our creativity – the gifts we’ve been given which allow us to express ourselves best – and to pass that on to others in our circles.

And so, I offer this ‘Sun’ card as my gift on this solstice – may the blessing and the abundance of the Sun shine on you and your creative endeavours!


Thank you for stopping off here on your own journey through this LithaTarot Blog Hop!  Please do come back and read some of my other posts.


The next stops on the Tarot Blog Hop are - depending on whether you’re moving backwards or forwards through the list – Louise's Priestess Tarot or Joy Vernon's blog . The Master List can be found here.