I’ve been challenged, recently, about my interpretation of the Judgment card.  In a reading, I’d said that Judgment wasn’t about judging and being judged – or at least, not only about that.  But others clearly don’t agree, so I thought I’d have a look and see what other views are around.

Rachel Pollack, in her Seeker: The Tarot Unveiled (Llewellyn, 2005), adds “rebirth, new possibilities, and wholeness” to the list.  In fact, she maintains (as do I) that Judgment is not about judging others, showing good judgement, or being judged themselves at all.  The child in the image reminds us that new opportunities and possibilities can appear when we heed the voice that tells us to let go of old, out-of-date, ways and beliefs.  The nakedness of the figures symbolizes openness as well as new beginnings – the state in which we were born into this world, but also the state in which we need to embrace this “re-birth”.  The trumpet, far from being the call to judgement, is in fact the “voice”, the push, the call – however it manifests – to step into the unknown and stop hiding.

Juliet Sharman-Burke, in her Beginners Guide to the Tarot (Connections, 2001), adds “resurrection and resolution” to the list.  She too sees this as an opportunity to greet the new with joy.  She calls it the card of karma, saying “it heralds the time of reaping what has been sown”.  You might see an element of judgement in that but, reading between her lines, I feel it’s more about assessment.  Yes, she does use the word “judge” – “to judge your actions and appraise what you have done” – but she goes on to say it’s more about the preparation for the next stage in life.

Liz Dean, in the accompanying guidebook to The Game of Thrones Tarot (Home Box Office, Inc., 2017), doesn’t use the word “judgement” in her description of the card.  She writes about being on the edge of a change, and focuses on the need for second chances after a review or appraisal, and about the chance to make sense of the past.

In the accompanying book to the Shadowscapes (Tarot Llewellyn, 2010), Stephanie Pui-Mun Law and Barbara Moore do refer to making a judgement.  They talk about holding an accounting, and about it being “time to evaluate the phase of life just past, to recognize and to appraise with an unbiased mind and honesty to oneself”.  They too see Judgement as a card of awakening, of hearing and responding to a voice or call, and the need to respond to it.

The creators of the Wildwood Tarot (Connections, 2011), Mark Ryan and John Matthews, are very clear in their view.  In the accompany book, they write that “The major element in this process [surviving inevitable change] is judgement of yourself and others.”, yet the word “judgement” doesn’t come up in their list of keywords.  “Karma” and “cosmic law” do, as does “inescapable truth”.  They do talk about renewal and rebirth, themes that are echoed in the image that Will Worthington has created for the card.  That idea of rebirth is also seen in the DruidCraft Tarot’s image (also by Will Worthington).

So yes, my challenger was right in saying that the card is about judging the self and others, but I think perhaps it depends on how we define “judgment” – and maybe I need to be clearer about that when I read!  (To be fair, the deck I was reading with, Kim Krans’ Wild Unknown Tarot, does focus on the forgiveness aspect, as I did in the reading.)  Kim Krans’ view is that the word carries such negative connotations – fear, guilt, shame – that it’s more helpful to seek the truth and forgive, not blame.  The image, the dove rising up above all the negativity (the darkness) and spreading its wings reflects that beautifully, I think.

Welcome to Alison’s Alembic! You may have arrived here as a stop on the Tarot Blog Hop from either Tarot and Stars' or Tarot of Change's blog. Or you may have found this through TABI’s Facebook page, or though one of the many wonderful tarot bloggers in the ether... It doesn’t matter – what does matter is that you’re here!

In the northern hemisphere, we're approaching the Autumn Equinox, also known as Alban Elfed, as well as the time for paying tribute to Mabon. It's the time of year when we’re poised between light and dark, with the hours of daylight and darkness being equal in length. It’s also the culmination of the harvest that was begun at Lughnasadh. At this time we celebrate the beginning of harvesting grapes, making wine, bringing in the sheaves for the canning, preserving, and other ways of gathering the fruits of months, sometimes years, of effort and care.

With all this in mind, our wrangler for this particular Blog Hop, Aisling, has given us the title

What Is My Harvest, and How Do I Find It?

She’s asked us to focus on the collecting of our personal harvest – what we’ve learned, what we’ve decided is important, what we’ve have decided to get rid of. How are we planning to make productive use of the autumn and winter months? How have we changed, what are we beginning, and what have we completed, and – most importantly, how have we begun to further and more deeply understand our ‘self’?

Aisling’s suggested using the concept of the Three Realms – Land, Sea, and Sky – to represent Body, Mind, and Spirit, and to draw three cards for each of the Realms, nine cards altogether. In each case, the cards will answer three questions, one set for Body, one for Mind, and one for Spirit.
These are the questions:

1. What do I need to know about the current condition of my body/mind/spirit right now?

2. What is the most important thing on which I need to focus in the realm of my body/mind/spirit as I move into the winter months?

3. What is the main content and context of this harvest of better health/new ideas/deeper spiritual resonance that I am going to receive if I focus on these things? 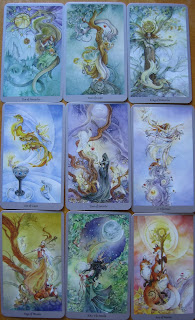 Card 1, at the bottom (Land), represents what I need to know about the current condition of my body, my health, right now. The Page of Wands tells me that I’m in the early stages of a new phase, and that it’s good news. That’s encouraging! With this being Wands and the suit of action and adventure, I see this as a pointer to do as much travelling and exploring as I can while I still have good health and the ability to do so.

Card 2, in the middle (Sea), represents the thing that’s most important for me to focus on as we move towards winter in terms of my health, or body. The Ace of Cups suggests more beginnings, but on an emotional front. That’s good too – emotional happiness has an effort on the body, and vice versa.

Card 3, at the top (Sky), represents what it is I will harvest in terms of improved health. The Ten of Pentacles indicates continued good health – not just in the body but in all material areas.


Moving over to the middle column, Mind –

Card 4, at the bottom (Land), represents what I need to know about the current condition of my mind right now. The World reminds me that I’ve achieved a lot this year, even if I haven’t always been aware of it. Despite difficulties there’s also been joy. New ideas for the coming months are about to seed themselves…

Card 5, in the middle (Sea), represents the thing that’s most important for me to focus on as we move towards winter in terms of my mind, my thoughts and beliefs. The Two of Swords indicates the need to stop procrastinating, something I’ve been doing a lot of recently. Find workable solutions – not necessarily perfect ones!

Card 6, at the top (Sky), represents what it is I will harvest in terms of new ideas. Another Two, the Two of Cups suggests a coming together of ideas. Moving from the edginess of the Swords to the softer Cups, from procrastination to creativity – bring it on!

Card 7, at the bottom (Land), represents what I need to know about the current condition of my spirit right now. The Ace of Wands tells me that a new spark is ready to be ignited, that within me there’s a way forward just raring to go! My spirit is lifted by the thought of travel and adventure of all kinds, and by the creativity that is born through such wanderings.

Card 8, in the middle (Sea), represents the thing that’s most important for me to focus on as we move towards winter in terms of my spiritual growth. The Fool tells me to take a leap of faith. Instead of wondering if I’m following the ‘right’ path, just pick one (shades of the Two of Swords sitting to the left) and see where it takes me.

Card 9, at the top (Sky), represents what it is I will harvest in terms of deeper spiritual resonance. The King of Pentacles is the court card that’s associated with the decan in which I was born, so this has particular resonance for me – I feel a sense of ‘coming home’ with its appearance here. A greater wealth in terms of spirit, some of which may come from voluntary work that I’m involved in, as well as my personal spiritual work.

Even though they cross realms, I’m really struck by the appearance of the first and final Majors in the spread. Those, and the two Aces and two Twos, really give me the sense of new beginnings, which will be very welcome. I’m also drawn to the richness of the greens and golds in the ‘Land’ row; it gives me a sense of being very grounded and supported (which I am). The blue-mauves of the ‘Sea’ row suggest flow, movement (Water and Air) – a good thing on which to focus. And the blue-green of the top row (Sky) suggests emotional, creative and intellectual fulfilment to come…

Thanks so much, Aisling, for this inspiring idea!


And thank you, readers, for stopping off here on your journey through this Mabon Tarot Blog Hop!  Please do come back and read some of my other posts – and if you’re a Facebook user, you can find me at Alison’s Alembic.

The next stops on the Tarot Blog Hop are - depending on whether you’re moving backwards or forwards through the list – Tarot and Stars or Tarot of Change. The Master List can be found here.