Welcome to Alison’s Alembic!   You may have arrived here as a stop on the Tarot Blog Hop from either Arwen Lynch's or Morgan Drake Eckstein's blog.  Or you may have found this through TABI’s Facebook page, or though one of the many wonderful tarot bloggers in the ether... It doesn’t matter – what does matter is that you’re here!

We’ve arrived at Beltane, an ancient Celtic festival which marks the beginning of summer and celebrates the waxing of the Sun. It’s symbolized by the lighting of bonfires, which also act as a means of purifying and cleansing.   Beltane is a cross-quarter day, marking the mid-point of the Sun’s journey between its location at the Vernal or Spring Equinox (0° Aries) and the Summer Solstice (0° Cancer). In astronomical terms, the date this occurs is usually 5-7 days later – this year the Sun reaches this mid-point (15° Taurus) on the 5th May.

Beltane falls in Taurus (in the northern hemisphere).  As a double Taurus myself, I feel a real sense of connection to this festival, perhaps through the link to the land – although I think it’s more likely to be the promise of longer and warmer days!  I have very little Fire in my natal chart, so perhaps I’m drawn to the Beltane fires, searching for that spark to set my creativity alight...

There are so many traditions tied in to all our festivals, Beltane included. It’s linked to May Day, to Walpurgis Night in Germany, to Calan Mai in Wales – mainly northern traditions, it would seem.  It feels fitting, then, that our wrangler for this Imbolc blog, Arwen, has asked us to write about traditions – in particular, what traditions are important to us in how we read the Tarot. 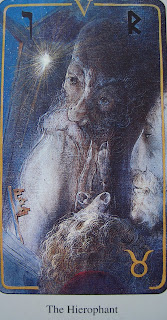 As it happens, I’d been thinking about traditions anyway. In a recent blog about the Hierophant, the Major Arcana associated with Taurus, I was reflecting on the ‘outer’ forms of tradition that have held communities together, in the form of the written or oral word – texts, prayers, teachings, and yes, ritual.  Such traditional forms of ‘teaching’ have held together societies and cultures for millennia – the Haindl Tarot’s Hierophant carries (top left) the Hebrew letter ‘vav’, meaning ‘nail’, to remind us of this.  And ritual carries with it, of course, a sense of the seasons, the turning of the year. We celebrate the passing of the year through a variety of rituals – leaping through the fire on Beltane being one of them!  Again, the Haindl’s Hierophant carries a reminder of this through the rune ‘radh’ (top right), meaning ‘wheel’, while the Wildwood’s Ancestor represents the end of hibernation and the coming of warmth and light; the return of abundance – a very Taurean word!

Social mores, religious dogma, cultural traditions passed down from one generation to the next (depicted by the grandfather-father-son in the Haindl image) - these all carry the idea of being fixed – perhaps even (Taurus being the fixed Earth sign) ‘set in stone’.  But the Hierophant is also about the need to transform and change, not just about sticking with tradition. Sometimes our traditions outlive their usefulness, and we need to recognize what no longer serves us as well as what’s still useful.

With all that in mind, how to answer Arwen’s question?  What traditions do I use when I read the tarot?   Am I a traditional or non-traditional reader?  Well, I do draw on traditional meanings, but I’ve come to realize, over the years, that just sticking with tradition doesn’t work for me – so I can connect to the Hierophant in that regard.  I’ve come to rely more and more on being able to connect intuitively to the symbolism in the cards.  I prefer decks that have images on all the cards, so I’m not a traditionalist in terms of using unmarked pip cards.  More of a High Priestess approach perhaps, which feels appropriate, combining the 'opposing' (in terms of duality) forces, creating a more 'complete' reader?

Just thinking about the fires of Beltane has sparked my imagination, inspiring this little spread to gain some extra insight...

In what way do I read ‘traditionally’?


In what way do I read ‘non-traditionally’?


What helps me to ‘leap through the fire’ when I read?


What is fuelled by the fire as I leap over it?

Using the Wildwood Tarot (created by Mark Ryan and John Matthews, illustrated by Will Worthington, published by Connections), I’ve drawn the Nine of Stones, The Wanderer, King of Arrows, and the Ace of Bows.  I follow tradition in the way I respect and use card meanings that have been passed down through time, yet I can allow myself to trust my intuition and necessarily ‘follow the rules’ – which for me required a leap of faith when I first started out!  I’m able to remain impartial, offering clarity rather than ‘judgement’, and in doing so, I can give the gift of empowerment to others.

The next stops on the Tarot Blog Hop are, depending on whether you’re moving backwards or forwards through the list, Arwen Lynch and Morgan Drake Eckstein. The Master List can be found here.