Cancer in the Druidcraft Minor Arcana: the Two of Cups


I’ve been working with the Druidcraft, so this year I thought I’d see how – or if – the astrological associations work with this deck.  The Druidcraft follows – obviously – Druid traditions, and was not created with astrology in mind.  Instead it focuses on the elements and the seasons.  Some of that may link to astrology – some of it may not.  We’ll see!

Cancer is linked to three ‘pip’ cards in the watery suit of Cups.  Because Cancer is a cardinal sign, we look to the 2, 3 and 4 of the suit to find the planetary correspondences (For more information on this system of Planetary and Zodiacal dignities, I recommend Elizabeth Hazel’s Tarot Decoded, published by Weiser, 2004). In the system I follow, the Two of Cups is linked to Venus in Cancer (as well as to the first ten days of Cancer).

Let’s look again at the sign of Cancer, the first of the Water signs we meet in the zodiac. The element of Water is associated with feelings and emotions, the ebb and flow of which can tap into our vulnerability. The shell of the crab represents the protection against this vulnerability, usually through the long-term emotional security and nurturing of family (not necessarily blood-relatives).

Now for Venus.  Venus has been called ‘the principle of attraction’. It describes our appreciation for beauty (a very subjective area!) and reflects our taste in all sorts of things (dress, art, music, etc) as well as giving us clues about the relationships we’re drawn to.

So, if we combine this with what we know about Cancer, we can see how the idea of relationship, friendship and commitment – all common keywords for the Two of Cups – play out in this card.  It takes the emotion of the Ace, divides it into two (the feminine and masculine, if you like), creating the idea of duality and balance – essential ingredients in a good relationship.  Venus in Cancer – the Two of Cups: the need to feel a sense of security in relationships, romantic or platonic.  It’s about giving and receiving love, sharing, and a deep emotional exchange in a protective, nurturing environment. And all of that I can see in the Druidcraft's image - the meeting of hearts!

The sun may have appeared to ‘stand still’ (the word ‘solstice’ meaning ‘standing of the sun’) yesterday but my world hasn’t slowed down until today!  But now that the excitement that comes with Tarot Blog Hop has waned, and the summer tour of my theatre group’s production is over, I have time to contemplate the solstice.

For those of us in the northern hemisphere, the sun has reached its zenith in the sky – its furthest boundary of power, if you like – and as such, its greatest potency.  For those of us below, it’s time to stop and look back at what we’ve achieved on our journey, since the winter solstice six months ago.  Now we can celebrate what we’ve created, as well as acknowledge what hasn’t worked.  It’s no surprise that this solstice (again, in the northern hemisphere) has been called the ‘Festival of Achievement’.


Cancer is the first of the Water signs encountered in the zodiac. Through the Moon’s rulership, it takes us into the ebb and flow of feelings and emotions – what we need to feel safe and secure.  To be safe, we seek protection and nurturing.   Through its affinity to the 4th house, it’s linked to ancestry, to roots, to tradition, to where we come from – and to the idea of sanctuary, what we’re drawn to...again, the idea of needing protection.  In Cancer this can come through family – through the emotional security and nurturing.  Think of the phrase ‘blood is thicker than water’, and you might start to see the link to the crab, the image of Cancer. 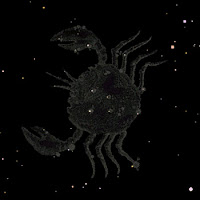 The shell protects the vulnerable crab, in the same way that family (and it doesn’t have to be blood relatives) protects us in our vulnerability.  In Greek mythology, Hera sends a crab to irritate Hercules while he’s attempting to slay the Hydra. He crushes the crab underfoot, but Hera rewards the crab’s loyalty by placing it in the sky.  Loyal, caring, compassionate, wanting to help  – all Cancerian qualities.

Cancer is one of the four Cardinal signs.  It will initiate whatever it needs to protect itself, its family, its loved ones.  Willing to take action to help and support others, Cancer doesn’t seek the limelight in the same way that Cardinal Aries might – but it’s just as imaginative!
Posted by Alison at 16:08 No comments: