Margarete Petersen’s version of the Five of Cups is not a traditional one! No overturned cups or full cups being ignored, as in more traditional (Rider-Waite-Smith-based) versions of this card – and the sense of loss or despair doesn’t really come across, to my mind.

Having said that, that swirling cloud over the beach does suggest turmoil – whipping up the sand, blurring the boundaries between sand and sea.  Emotional turmoil then, with boundaries in relationships unclear.

The saving grace here is the deep blue sky above the spiraling cloud – the promise of better weather, better times (i.e. the ‘growth and future positivity’, to quote the accompanying book to the deck) to come.

Like gentle rain, tears
Wash away clouds, revealing
The promise of the sun.

Margarete Petersen Tarot, AGM-URANIA, 2004
Posted by Alison at 14:58 No comments: 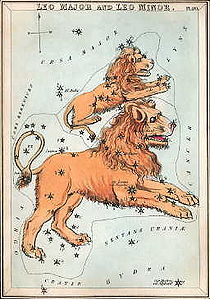 Today, at 10.30am BST, we entered the sign of Leo, astrologically speaking.  This sign is associated with the heart – and gold, the metal associated with the sun (which rules Leo), is used in homeopathic remedies for the heart.  It’s also associated with royalty – with kings, in particular. The brightest star in the constellation of Leo (‘Leo’ being Latin for lion), Regulus (Alpha Leonis) was called ‘qalb al-Asad’ by the early Arab astronomers – which translates as ‘heart of the lion’.  Allegedly, it was Saladin who called Richard I the ‘lion-hearted king’.  The lion has been called the king of the forest, or jungle – long before Disney came along with ‘The Lion King’ – and has come to symbolize natural leadership, as well as royalty. 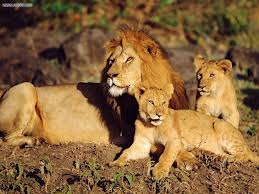 As well as being one of the Fire signs, it’s also one of the four Fixed signs.  Leo represents the fire that’s burning in the hearth, the fire that Aries may have ignited – Leo tends that fire, keeps the passion alive. As the fire heats the house, keeping its inhabitants warm and dry, Leo encourages and supports others.  Being Fixed, Leo likes to be in control of the environment, though – disruption is NOT encouraged.  We can see this in Leo’s tendency for extravagance too – yes, Leo loves beauty and maintains a distinctive, individual style but that disregard for the cost comes from a ‘fixed’ trait (one more often associated with Taurus!) – that of laziness. Leo can’t be bothered to find out if there’s enough in the coffers – and would not be happy about the idea of having to make adjustments to expenditure. Leave that to a mutable sign – practical, earthy Virgo, perhaps!

The tarot card associated with Leo is Strength, which traditionally depicts a woman taming a lion. Margarete Petersen’s Strength card is a relatively traditional image, although the woman is a Hindu-like goddess whose hand rests on the head of a very scaly dragon, or perhaps a gryphon. I think the dragon-gryphon looks a bit taken aback by this, but that might just be my imagination! It does seem to be calm, tamed by the feel of her hand on its head.  The power of inner strength comes through loud and clear, I'd say - strength in all forms, perhaps, and certainly compassion, which I view as a strength.

Lots of red and gold in this image, suitable for a card that as, astrologically, Fire connections. And the stillness of both woman and creature could reflect the Fixed nature of Leo, don't you think?

Strength lies in stillness
Yet nourishment comes too from
Dancing by fire’s light.