The Summer Solstice has passed, and we’re now in the astrological sign of Cancer.  Cancer is the cardinal Water sign, so it seems appropriate to initiate (cardinal quality) ourselves in the watery suit of the Cups in the Margarete Petersen Tarot – starting with the Ace!

What a beautiful image!... the single lotus, opening its heart, floating on clear, pure water. Margarete Petersen writes that the Aces show the characteristics of the element in concentrated form, so here we have the idea of a pure love and happiness.  The lotus represents renewal and the opening of the heart.

I often see the Aces as a gift, or a seed from which something can grow, as we progress through the suit.  By opening up and trusting our instincts, we leave ourselves open to new friendships and relationships – including a renewal of our relationship with ourselves! 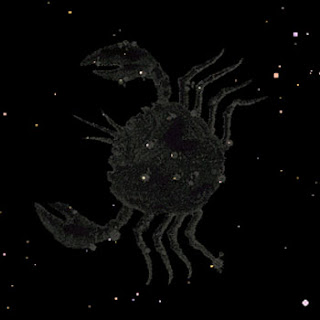 For those of us in the northern hemisphere, the sun reached its zenith in the sky – its furthest boundary of power, if you like - and as such, its greatest potency,  at 23.24 British Summer Time today (20th June) - and moved into the sign of Cancer, astrologically.

It appears to 'stand still' (the word 'solstice' means 'standing of the sun') For those of us below, it’s time to stop and look back at what we’ve achieved on our journey, since the winter solstice six months ago.  Now we can celebrate what we’ve created, as well as acknowledge what hasn’t worked.  It’s no surprise that this solstice (again, in the northern hemisphere) has been called the ‘Festival of Achievement’.

And here's something I 'achieved' (not this year!) - part of a mixed-media dodecahedron depicting the signs of the zodiac. Here's the Cancer panel:

There’s a shift associated with this point. Different traditions describe it in different ways – be it the Oak King giving way to the Holly King, the Sun King descending into the underworld and succumbing to the Queen of the Night – the Moon.  And of course, the Summer Solstice marks the ingress of the Sun – astrologically speaking – into Cancer, the sign of the crab, ruled by the Moon. And although the Moon card in the tarot is actually associated with Pisces, I often think of the crab, half-in, half-out of the water in the light of the moon at this time!

Cancer is the first of the Water signs encountered in the zodiac. Through the Moon’s rulership, it takes us into the ebb and flow of feelings and emotions – what we need to feel safe and secure.  To be safe, we seek protection and nurturing.  Through its affinity to the 4th house, it’s linked to ancestry, to roots, to tradition, to where we come from – and to the idea of sanctuary, what we’re drawn to...again, the idea of needing protection.

In Cancer this can come through family – through the emotional security and nurturing.  Think of the phrase ‘blood is thicker than water’, and you might start to see the link to the crab, the image of Cancer.  The shell protects the vulnerable crab, in the same way that family (and it doesn’t have to be blood relatives) protects us in our vulnerability.  In Greek mythology, Hera sends a crab to irritate Hercules while he’s attempting to slay the Hydra. He crushes the crab underfoot, but Hera rewards the crab’s loyalty by placing it in the sky.  Loyal, caring, compassionate, wanting to help  – all Cancerian qualities.

Cancer is one of the four Cardinal signs.  It will initiate whatever it needs to protect itself, its family, its loved ones.  Willing to take action to help and support others, Cancer doesn’t seek the limelight in the same way that Cardinal Aries might – but it’s just as imaginative!
Posted by Alison at 23:40 No comments: