Aquarius in the Major Arcana - The Star


Let’s continue our exploration of Aquarius in the tarot with the Major Arcana. We already know that it combines the element of air with fixed energy, making it a very ‘in your head’ sign.   It’s associated with ideology and reform, humanitarianism and working with community and groups.  In Greek mythology, Ganymede was the cup-bearer to the gods, serving them with the nectar or ambrosia which gave them immortality – and was placed in the heavens as the constellation Aquarius as his reward.  The contents of that cup were life-sustaining – and what is it that sustains us, more often than not? Hope. And what card in the Major Arcana could we connect with hope? The Star!

Traditional depictions of The Star show us a young, naked woman with two pitchers of water – a water carrier.  Her youth is said to symbolize renewal, while her nakedness represents truth for all to see.  In the Sharman-Caselli version, she has one foot on land (past) and the other in water (the future), linking the two - and perhaps also linking the conscious and unconscious.  The foot in water also links us to the Pool of Memory, allowing us to remember events that give us hope, that sustain us.  Her two water jugs sustain both the land and the pool. See too how the water on the land separates into five streams, symbolizing our five senses, before returning to the pool.  Aquarius may be detached, but it can certainly feed us, providing us with hope and optimism – the promise of a new day (dawn).  The card carries the number 17, 1 + 7: there is one large star in the dawn sky, surrounded by seven smaller ones, adding up to eight, the number of re-birth and regeneration – more promise of hope.

The Shadowscapes Tarot gives us a more ethereal figure. She's not a water carrier in the strictest sense of the word, although both water and air (remember we're talking about Aquarius here) are present in the image - her feet dance in water while the rest of her dances in the air against a backdrop of the Milky Way, representing perhaps the fixedness of this sign (yes, there are some stars that are referred to as 'fixed'!).  According to the creator, in the accompanying Shadowscapes Companion (see details below), "she dances the dance that the stars have choreographed...their silent homage to the burning spirit they have witnessed." So although in reality stars shine with their own light, you could say these ones are reflecting the hope that each person carries!

Sailors used to, perhaps still do, navigate by the stars at night. The Pole Star is one of the (apparently) ‘fixed’ star in the sky, making it particularly useful in celestial navigation – and therefore a symbol of hope in its own right.   In the Wildwood Tarot, the Pole Star is referred to as a symbol of “universal law, spiritual knowledge and power”. What brings it back to the traditional meaning of the Star, for me, is the idea of universal knowledge being a web – a very Aquarian concept!

The Thoth uses the Egyptian sky goddess Nuit (also known as Nu, Nut, and Nuith) to depict the water carrier.  Here we get more of a sense of the ideological aspects of Aquarius – Nuit receives inspiration from the universe and allows it to flow through her, passing it on to humanity, or the greater good.  The card represents clarity of vision, which we could associate with the ‘airiness’ of Aquarius, while Nuit appears to be grounded, representing the ‘fixedness’ of the sign.

No surprise that Imbolc occurs during our sojourn in Aquarius – first signs of spring bringing forth hope.The  Imbolc Tarot Blog Hop takes place on 2nd February – watch this space!

Aquarius in the Minor Arcana: The Five of Swords


Let’s start our exploration of Aquarius in the tarot with a dip into the Minor Arcana.  In the astrological correspondence system that I follow, Aquarius is linked to the Five, Six and Seven of Swords (for more information on this system, I recommend Elizabeth Hazel’s Tarot Decoded, published by Weiser, 2004). Today I’m going to look at the Five of Swords, which corresponds to Venus in Aquarius – as well as the first ten days of Aquarius (20th to the 29th January).

Aquarius is the fixed Air sign, so we’re looking at maintaining lines of communications, and establishing ideas and concepts – but not just any old idea. This is the sign of the unconventional and the unorthodox, the reformer and revolutionary.  When we add Venus, the ‘principle of attraction’, to this we have a sign that expresses itself freely, perhaps flirtatiously – but very likely in an experimental way.  Aquarius can be detached and impersonal, so that flirtation might be very superficial and could impede the development of intimate relationships.  There’s a strong need for active socializing, for establishing groups based around a common cause, but this will be influenced by beliefs in individual freedom and expression, which could lead to conflict if not managed.

So how might this play out in the Five of Swords?  Let start with a relatively ‘traditional’ depiction of the Five of Swords, such as that of the Sharman-Caselli deck. Here we see a figure standing in a triumphant pose, holding three swords aloft while the other two lie at his feet.  Two figures behind him are creeping away in defeat, heading towards choppy waters and a stormy-looking sky.   Juliet Sharman-Burke, in her accompanying book to this deck, writes of needing to ‘accept the limits of both victory and defeat’.  The limits come through the fixed-ness of Aquarius, I feel – needing to recognize that there are limits to what we want to achieve, what we’re attracted to (the Venusian quality). Not that we have to give up, necessarily, but to accept a ‘temporary defeat’ or setback by objectively (Aquarius again) assessing how strong we are, be it as an individual or group, in relation to our opponent, be that another individual or community, and being able to step back from a battle that can’t be won.  A battle – not the ‘war’.  By knowing when to walk away from a situation or relationship, whatever it might be, we live to fight another day for what we believe in, what we’re pulled towards – the attraction principle, again.

In the Shadowscapes and Thoth decks, the emphasis is the same, although the images are very different.  Things are out of balance due to the tension or conflict between ideologies, say (represented by the birds and clouds, symbols of Air) – the harmony that we normally associate with Venus has been lost.

Aquarius looks towards the future though – it’s the forward-thinking sign.  The challenge is to stay objective, to be able to look at the situation clearly and to assess the options open to us, rather than succumbing to the loss of hope – the Venusian/Aquarian ideal. 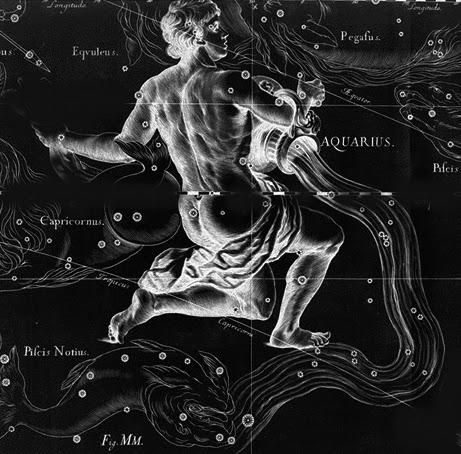