Sagittarius in the Minor Arcana: The Ten of Wands


The Ten of Wands, in the astrological correspondence system I follow, corresponds to the last ten days of Sagittarius (12th-21st December), and is linked to Saturn in Sagittarius. 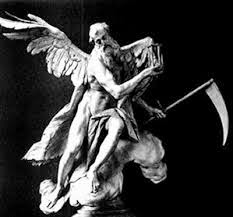 Sagittarius is the mutable Fire sign, so we’re looking at transforming what’s been established into something else.  It combines a fiery passion and creativity with the expansiveness and benevolence of Jupiter, the ruler of Sagittarius, to give us the visionary, the explorer, the philosopher.   Yet Saturn is almost the opposite of Jupiter; where Jupiter expands, Saturn contracts. It sets boundaries and places restrictions – it makes us aware of limitations.  Remember that Saturn is the Roman counterpart to Cronos (or Kronos), the Greek god of time and chronology – as well as being the father of the Greek pantheon.  So the limits or restrictions that Saturn imposes are often to do with time...

There are certainly Saturnian themes at work in the traditional meanings associated with the Ten of Wands.  Oppression, heavy burdens, struggling... The fiery creativity of Sagittarius has become hard work, a heavy load, something with which we struggle.  We’ve taken on too much, we can’t deliver – we’ve over-reached ourselves, exceeded our limitations.  But – and it’s a big ‘but’ – who’s forced us into this position? More often than not, it’s ourselves who’ve imposed the pressure.  And if not ourselves, it’s us who ‘decide’ we can’t do anything about it. The solution? Take some time – ah, see, this is where Cronos comes in! – lay down that pile of wands or whatever it is that we’re holding onto so awkwardly, and slowly (Saturn again) work out the best way to carry them towards our goal.

So, Saturn in Sagittarius is not all doom and gloom! It can represent the need to establish ourselves through beliefs and aspirations of long-term goals.  In aiming towards those philosophical, far-off ideals and goals, there will be a willingness to put in the hard work necessary to achieve them, resulting in a sense of satisfaction – and perhaps even a sense of stability or security.

This combination can also symbolize the ability to accept, in a very expansive and broad-minded way, a number of duties and responsibilities – often taking on more than can be dealt with!  There can be a tendency to organize things ‘on the run’, to ‘wing things’ (think of those wings on the Sagittarian figure), and may be constantly changing the agenda to suit changing situations.  Not always a bad thing – being able to ‘think on your feet’ is an advantage, and one that I need to develop!