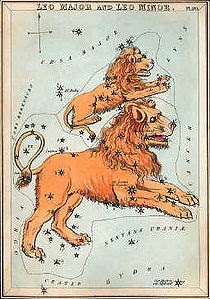 Today, at 22.41 BST, we enter the sign of Leo, astrologically speaking.  This sign is associated with the heart – and gold, the metal associated with the sun (which rules Leo), is used in homeopathic remedies for the heart.  It’s also associated with royalty – with kings, in particular. The brightest star in the constellation of Leo (‘Leo’ being Latin for lion), Regulus (Alpha Leonis) was called ‘qalb al-Asad’ by the early Arab astronomers – which translates as ‘heart of the lion’.  Allegedly, it was Saladin who called Richard I the ‘lion-hearted king’.  The lion has been called the king of the forest, or jungle – long before Disney came along with ‘The Lion King’ – and has come to symbolize natural leadership, as well as royalty.

Leo’s ruler, the Sun, is the star at the centre of our solar system. The sun gives us life – without the light and heat that it provides, life as we know it wouldn’t exist.  Psychologically, the Sun is said to be the core of our being or centre of our personality. It’s the fiery, creative spirit - our essential vitality - that drives us to seek out our individuality.  In medieval astrology, the Sun is called ‘the Great Light’. No surprise then that we think of Leo as a sunny, warm-hearted, larger-than-life sign – a sign that loves to be centre-stage, in the spot-light.  On the wonderful Alchemical Journey, one of the things we did to celebrate Leo was to make our way, one at a time, a ‘cat-walk’ toward a ‘throne’, where we would each receive the honour and respect of the others in the group.  Some found it easy to be in the spot-light; others, less so! 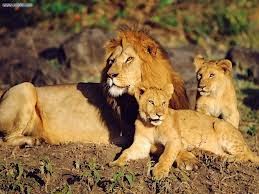 Being Fixed, Leo likes to be in control of the environment, though – disruption is NOT encouraged.  We can see this in Leo’s tendency for extravagance too – yes, Leo loves beauty and maintains a distinctive, individual style but that disregard for the cost comes from a ‘fixed’ trait (one more often associated with Taurus!) – that of laziness. Leo can’t be bothered to find out if there’s enough in the coffers – and would not be happy about the idea of having to make adjustments to expenditure. Leave that to a mutable sign – practical, earthy Virgo, perhaps!

The image (top right) comes from my AstroArt series, inspired by walking the Glastonbury Landscape Zodiac, part of the Alchemical Journey (www.alchemicaljourney.co.uk).  ‘Leo’ is a collage: watercolour on paper, and origami paper.
Posted by Alison at 16:09