Tarot Blog Hop: Lammas and the Queen of Pentacles

Welcome to Alison’s Alembic!   You may have arrived here as a stop on the Tarot Blog Hop from either Joanna Ash's or Arwen Lynch's blog.  Or you may have found this through TABI’s Facebook page, or though one of the many wonderful tarot bloggers in the ether... It doesn’t matter – what does matter is that you’re here!

For those of you unfamiliar with Lammas, it’s the festival of the harvest.  Also known as Lughnasahd, the cross-quarter fire festival, it’s celebrated on the evening of the 31 July and on the first three days of August. More specifically, Lammas is the first harvest (usually of grain and fruit – the basic food that sustains us through the winter), when farmers begin to reap the rewards of their hard work.  It’s associated with baking bread from that first harvest of grain, but has also been called ‘the festival of gratitude and first seeds’ because the grain is also the seed that becomes next year’s harvest – a reminder of the cycle of life.

Lammas celebrates the alchemy of Water and Fire - we’ve just left the water sign of Cancer and are now in the fire sign of Leo.   The sun still carries enough energy to help the crops to ripen, but we need rain as well.   Lugh, the Celtic god and Sun King, gives up his power at Lammas, just as the sun starts to wane and lose its power.  We too need to give up something of our outer selves as we prepare for the inner journey of the winter.  It’s a time for assessment, as well as celebration.

She described for us the Radiant Rider White deck’s Queen, sitting on a throne decorated with flowers, fruit, animals and angels, and surrounded by trees, flowers and lush greenery – all symbols of prosperity and wealth. A rabbit, symbolizing fertility, sits at her feet. The Sharman-Caselli’s Queen of Pentacles depicts a similar image.  The arms of the Queen’s throne are decorated with bulls’ heads, representing Taurus (Juliet Sharman-Burke  assigns the Queens to the fixed astrological signs, on the principle that Kings order things, Queens maintain, and Knights disseminate). Venus, the ruler of Taurus, is represented by the roses – symbols of love, youth and beauty. Taurus is often said to be the sign of the farmer and the gardener; well, we see plenty of evidence of nature’s abundance and the labour that’s gone into growing and nurturing it here.  This Queen of Pentacles is very connected to the earthy reality of Taurus – she’s maintaining what’s been started by the cardinal energy of Aries, and enjoying the fruits of her labour as only Taurus can! 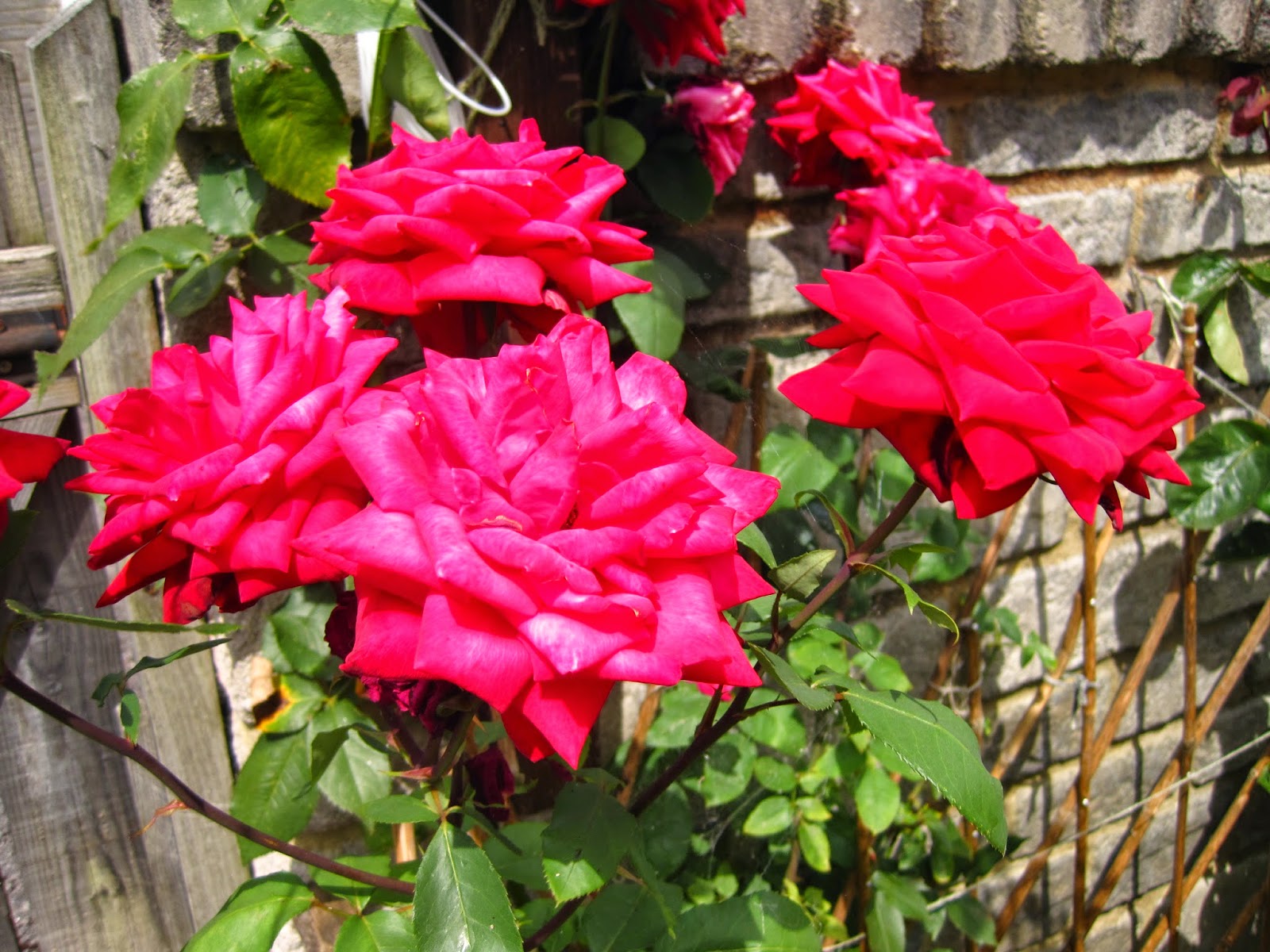 Well, I can’t say I’m channelling the growing and nurturing of crops this year! Flowers, yes...an abundance of flora in my tiny ‘courtyard’ garden but that’s about it. But Joanna’s asked us about our inner Queen of Pentacles, so for that I’m going to look elsewhere.

Other systems (e.g. the Book-T system) see the Queens as having more cardinal qualities – cardinal Earth gives us Capricorn.  In the Crowley Thoth deck, Lady Frieda Harris has given us a different image to work with – and one of my favourite representations of this Queen.   We see her resting in a green and fertile oasis, looking back over the barren, difficult landscape that she’s had to travel through to reach this point. The goat, symbol of Capricrorn, looks at us - rather cheekily, I always think – as if to say “see? We made it!” – reminding us of the tenaciousness and independence of the mountain goat as he surmounts obstacles in his way. We see this too in the curved horns on the Queen’s headdress. This Queen knows what she needs in order to nourish herself – and others – and has worked hard to achieve it. Now she can rest and enjoy the fruits of her labours.

Right now my inner Queen of Pentacles is being channelled into completing the sale of my house, and looking towards reaping the fruits of that ‘labour’.  I do feel like the Thoth’s Queen, as it’s been a long road to get to this point – and it’s felt pretty arid along the way at times!  But I do feel a sense of liberation coming, that I’ll be able to sit amongst the flowers with the ‘world in my arms’, enjoying a rest...

Rachel Pollack (Seeker: The Tarot Unveiled, Llewellyn, 2005) writes of this Queen’s “dedication to her element and her high level of ability ...  someone who enjoys nature but also just life itself”.  In the accompanying book to the Shadowscapes Tarot, Stephanie Pui-Man and Barbara Moore write of someone “secure in her material possessions and her position in life”, and of “being willing to share the strength...from the warmth of the sun...”.  We’ve certainly been enjoying the warmth of the sun here in the UK recently, and I've been able to spend more time outside, revelling in the natural world.

So, as I rest among the roses and the begonias and the other things I’ve planted but can’t remember the names of, awaiting the exchange of contracts that will bring me some financial /material security – and a reply to a job application I’ve just sent off, I ask myself some Queen of Pentacles-type questions (images from the Shadowscapes Tarot):

What can I take from my achievements as I leave this oasis?

The Two of Wands.  The lion – very appropriate as we’re now in Leo – tells me to take strength and courage with me.  It’s time to be bold and to trust my intuition, and not to hold back from doing what needs to be done.


What can I leave behind?

The Four of Cups tells me it’s not time for introspection. It’s time to stop being so concerned about my own affairs and see what’s going on outside!

The Sun.  More strength – life and growth. Another Leonine symbol (the Sun rules Leo) – time to start working creatively with others - the very things I’m just about to start doing! Making stained-glass suncatchers for friends, cards for friends' birthdays, creating a pennant for an upcoming outdoor event - so many ways to channel my Lammas Muse! Thanks, Joanna.

And thanks to you for stopping off here on your journey through this Lammas Tarot Blog Hop!  Please do come back and read some of my other posts.

The next stops on the Tarot Blog Hop are - depending on whether you’re moving backwards or forwards through the list – Joanna Ash’s or Arwen Lynch's blog.